A lot of MacBook user report a certain voltage phenomenon. The MacBook vibrates when touched. The same happened to me with a MacBook 12” early 2016) and a MacBook Pro 13” (early 2020). Plugging in, it feels like current or voltage is going through your hand or fingers while touching the MacBook, especially left or right beside the Trackpad.  It feels like micro-vibrations. It is not a buzzing you hear, you feel it with you run your fingers through the metal case. 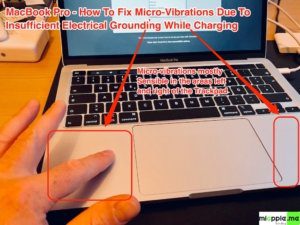 MacBook_Pro_Fixing Vibrations While Charging No Grounding

The ‘vibration’ as some call it, or ‘tingling sensation in the fingers’ or ‘Macbook vibrates if touched” as other call it (while charging) is not harmful to your Mac or to you. Some users find it alarming or inconvenient.

The origin of the micro-vibration of MacBooks

This is particularly common complaint for MacBooks because of their metal case. Other laptops with a plastic case usually don’t have the problem. I asked a lot of my Apple friends and all (!) reported these micro-vibrations. Some of them thought that it’s “normal” for MacBooks! Somebody told me that his 12 year old MacBook Pro got this electrical issue, too. This means it is an permanent problem of all MacBooks, MacBook Airs and MacBook Pros.  This electrical grounding effect is more or less also impacted by the country standard voltage and your personal office set up (wearing shoes, having a carpet or not…).

Depending on the design standard, this leakage current is limited to two or three hundred microamps. This is not enough to be dangerous, most people can’t even feel it, but it can cause slight tingling in certain circumstances, especially if you body has a good connection to earth ground.

So what it boils down to is a design trade off between leakage current and EMI noise suppression. In order to reduce the amount of EMI, there exists a tiny amount of leakage current through the filter capacitor. Verifying that the leakage current is a safe level is part of the certification testing for the power adapter.

The solution for eliminating micro-vibration of MacBooks

Mac laptops have historically been shipped with both an ungrounded two prong plug and a grounded three prong extension cable for the power adapter, and “the tingle” was something that was usually resolved by using the grounded (three prong) extension cable with the power adapter. However, I understand that Apple is no longer shipping the three prong extension cable with some machines, which is bizarre and churlish, but there it is. You can buy a grounded plug off of Amazon, although if you’re plugging into an ungrounded outlet or one with a “fake” ground, it won’t make any difference.

Based on my experience, I think it’s unlikely that if you exchange the machine you will get one that does not demonstrate this unfortunate artifact of a metal case with an ungrounded power supply. I suggest to try the grounded extension cable first if you haven’t already.

A lack of sufficient electrical grounding of MacBooks with a metal housing leads to micro-vibrations left and right beside the Trackpad. It feels like macBook is vibrating when touched. The fix is to take a grounded power adapter with three pins / lines.