Software update 7.0.2 beta is available only for Apple TV (3rd generation). Find out which Apple TV you have. The update is only available for developers. After updating, the Apple TV software version shown is 7.0.2 (6915), the build number was 6912 on Apple TV 7.0.1. Hijacking Trailers app, iMovie Theatre and WSJ app works on Apple TV 7.0.2 beta software. 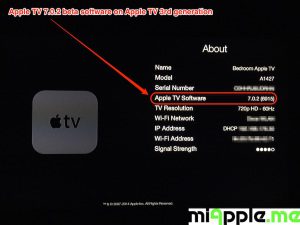 If you install Apple TV 7.0.2 software for the very first time, there is the need to restore your Apple TV, meaning all added profile were deleted. Hence, re-install the certificate file to get PlexConnect running again. I used the same certificate file I generated for Apple TV 6 software and installed the profile following ‘PlexConnect: Installling Certificates On Apple TV Without USB‘. Finally, I configured the DNS of the Apple TV 3 to the IP address of my Plex Media Server according to the GitHub DNS configuration guide and PlexConnect works as good as before the update. If you are new to PlexConnect then follow the work around to get PlexConnect running on your Apple TV:

Finally, I am very delighted that Plex, PlexConnect and OpenPlex are still running on the Apple TV 7.0.2 beta software and Mac OS X 10.10 Yosemite without any issues!