iStorage 2 HD 2.4 is a universal file manager and FTP app for iPhone and iPad. Since my first review about iStorage 2 HD on June 24, 2012, iStorage 2 HD was much improved and got a universal app. The last update 2.4.1 was released 8 months ago on September 3, 2013. Therefore, I was interested if iStorage 2 HD still fits my requirements on iOS 7. 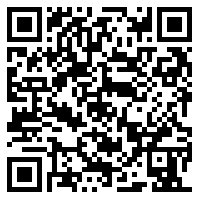 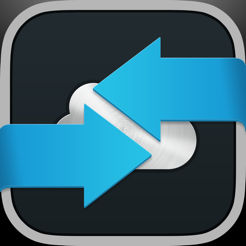 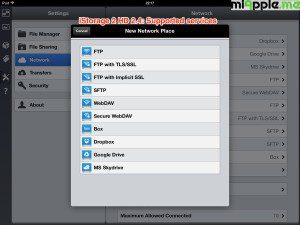 Files can be copied or moved via drag&drop using the 2-screen displaying option. Select the origin drive on the one side and the distinction drive on the other side. Tap on the file you want to copy or move, hold it and drag to the other display side. After dropping the file the selection for copying or moving appears. 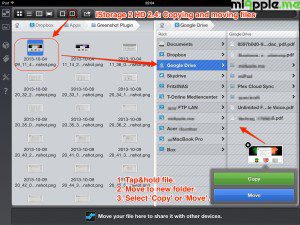 Bluetooth and WiFi transfer of files:

Another useful tool of iStorage 2 HD 2.4 is the option to transfer files via bluetooth or WiFi to other iOS devices. iStorage 2 HD has to be running on the iOS devices for transferring the file. However, I think in an update this function will be substituted by AirDrop. 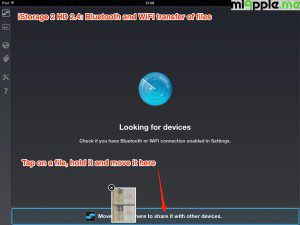 File manager and FTP feature comparison of iStorage 2 HD 2.4.1 to CloudCommander for iOS 3.7.3: 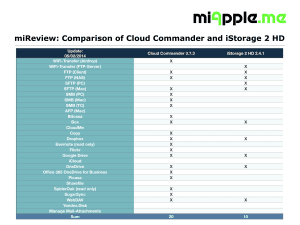 iStorage 2 HD for iPhone and iPad for iPhone is an good alternative to file manager and FTP apps like Cloud Commander for iOS, Documents by Readdle, FileBrowser, FileExplorer or GoodReader. The plus of  iStorage 2 HD 2.4  is the drag&drop option to copy files between different drives. The minus is the missing support of SMB protocol for accessing Apple’s Time Capsule and AirPort Extreme with an attached storage drive. Therefore, Cloud Commander for iOS is still my favourite file manager and FTP app for iPhone and iPad.